I have finally finished the blanket I was crocheting for our youngest grandchild. It was supposed to be a gift for when the baby was born, but I didn't manage to finish it until last weekend. I handed it over on Tuesday and our granddaughter seemed to like it. As she is now 11 months old (oops!), you can see that it took a lot longer than I intended.

The problem was, not only did crocheting the squares create a lot of ends to weave in, but every stage after that created what felt like another 9 million ends. :( There was joining the squares together. There were the ears to put on, and the mouths to crochet and the eyes to embroider.

The other reason it took a long time was that it's the project that got me back into crocheting. My skills were rusty and I've probably speeded up now, more than twelve months on from when I started this.

In the photo below the completed blanket is on the left. Top right picture shows a close up of the funny faces after blocking. Bottom right shows the squares just after completing. You can see how much better the ears and faces look after being pulled into shape and gently steamed. However, I suspect that after the blanket has been thoroughly cuddled and sucked on, the ears are not going to stay flat for very long!

In case anyone is interested, here is the original pattern I used, which is a free download on Ravelry. As the blanket was going to be for a baby, I didn't add the bows shown on the Ravelry page. I also crocheted the ears directly onto the blanket, rather than making them separate and sewing them on. I don't trust my sewing not to come adrift. Also, I'm not as good at embroidering the features as the designer of the pattern, but I think they'll do. :) 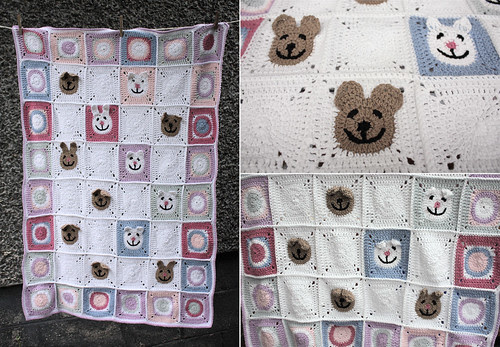